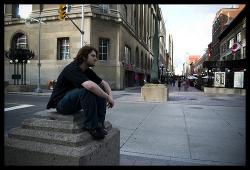 Jacob Atkinson (Film Editor/Production Assistant) is currently a second year student at Queen's University working toward a Bachelor's degree in Stage and Screen studies. In his first year at Queen's, he has gained experience with their drama department as well as with Blue Canoe Productions, including acting in productions of Sweet Charity and Beatrice and Virgil. Jacob also wrote, directed and produced promotional videos for Blue Canoe's production of Dr. Horrible's Sing-Along Blog. In September, he will take his position as head of media for Kingston's Dalliance Theatre Company.

Jacob worked as film editor and Production Assistant in YOW Productions' earlier project Running. He is currently working as a summer intern for YOW and hopes to continue to work with them in the future