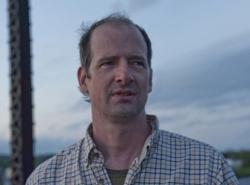 (Christopher) William Gill was born in Ottawa, Ontario on July 5, 1968. He moved to Sackville, New Brunswick in 1987 to begin his formal training in art through a BFA at Mount Allison University, with a main focus on sculpture. After graduating from Mt. A, Halifax was home for several years. An opportunity presented itself in 1997 to move to St. John’s, Newfoundland, to work as an apprentice at a bronze-casting foundry for sculpture. He has been in St. John’s ever since.

Gill has maintained a studio practice, since graduation, that has evolved from solely sculptural exploration, to one that encompasses sculpture, painting, photography and video work. His subjective interests vary, but one can safely say that he has a skewed, but often beautiful, take on human nature. He has a wide-ranging exhibition history that includes shows in artist-run centres, commercial galleries, and public galleries/museums at home and abroad. Considerable attention has been paid to his work in the form of critical writing in magazines, newspaper articles and radio and television spots. Peer juries have consistently recognized and supported his work through grants from both the Newfoundland and Labrador Arts Council and the Canada Council for the Arts.

Gill was selected to the national longlist in the 2004 and 2006 Sobey Art Award competitions. The "Sobey Art Award" is Canada’s premiere award for acknowledging contemporary artists under 40 years of age. His work is in many private and public collections and is handled exclusively through Christina Parker Gallery in St. John’s, Newfoundland.

One of Gill's sculptures appears, and plays a pivotal role, in Episode 8. You can view more of Gill's art on his web site.