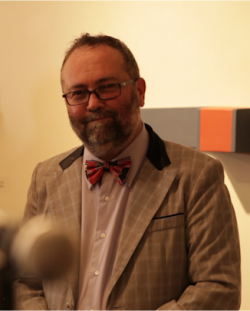 Don Monet is a community-centred Ottawa artist, curator and activist. He concentrates his studio efforts toward landscape, photo-collage and found-object paintings. Owner of Cube Gallery, Ottawa, now in its seventh year, he has organized dozens of thematic group exhibitions and solo shows featuring Ottawa and National visual artists, musicians, actors and dancers. He has taught culture, communications, ethics, and audience research courses (sessionally) at the University of Ottawa, and cartoon and art classes to children at the National Gallery, and several elementary schools. Much of his work is informed by the 13 years he lived and worked with the Gitksan and Wet’suwet’en peoples in Northern B.C. In 1992 he published a Canadian classic: "Colonialism on Trial", a graphic documentary following the Delgam Uukw court action of 87-91. For the community, he has organised a Haitian Fundraiser (2010), Doctors without Borders Fundraiser (2007),The Mayworks Artist Directory (2005), Union~Art at Ottawa City Hall Gallery (2004), Art vs War a WarChild Fundraiser (2003); Art~Work, Mayworks festival (2003); Crime Seen (2001) and Art Against War (1999) at Gallery 101. In 1995 he founded the West End Studio Tour, an annual tour in Ottawa’s West end now in its 16th year. He has created courtroom sketches and illustrations for the National Film Board (NFB), Global Television, CBC and the Ottawa Citizen.

Don graciously allowed us to shoot in the gallery for Episode 8, and ensured we had permissions to show the art on the walls, some of which is his own.